Rendering of components in Tapestry 5 is based on a state machine and a queue (instead of the tail recursion used in Tapestry 4). This breaks the rendering process up into tiny pieces that can easily be implemented or overridden. Don't worry, in practice, writing components requires a breathtakingly small amount of code.

The rendering of each component is divided into a number of phases, illustrated below. 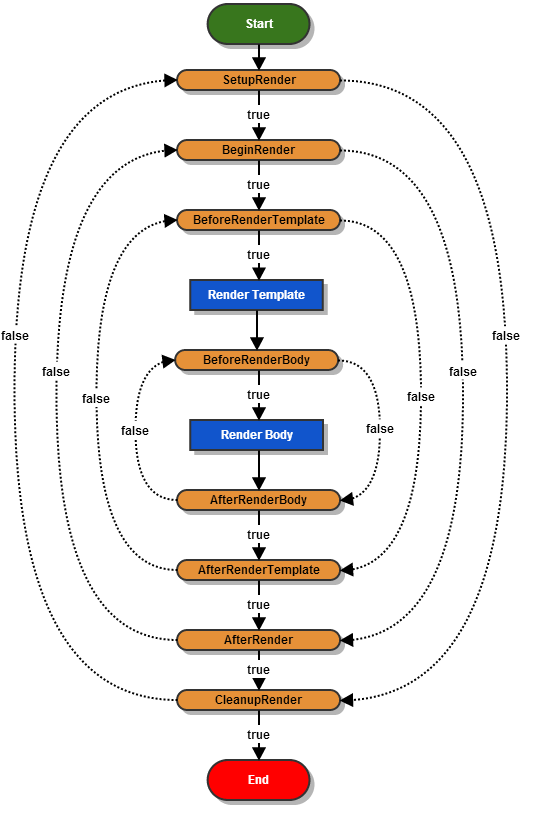 Each of the orange phases (SetupRender, BeginRender, BeforeRenderBody, etc.) corresponds to an annotation you may place on one or more methods of your class. The annotation directs Tapestry to invoke your method as part of that phase.

Methods marked with these annotations are called render phase methods.

Your methods may be void, or return a boolean value. Returning a value can force phases to be skipped, or even be re-visited. In the diagram, solid lines show the normal processing path. Dashed lines are alternate flows that are triggered when your render phase methods return false instead of true (or void).

Render phase methods may take no parameters, or may take a parameter of type MarkupWriter. The methods can have any visibility you like ... typically, package private is used, as this visibility makes it possible to unit test your code (from within the same Java package) without making the methods part of the component's public API.

All Render phase methods are optional; a default behavior is associated with each phase.

The large number of phases reflects the need for precise control of components from component mixins. Several of the phases exist almost exclusively for mixins.

Here's the source for a looping component that counts up or down between two values, renders its body a number of times, and stores the current index value in a parameter:

Returning false from next() causes Tapestry to re-run the BeginRender phase, and from there, re-render the component's body (this component does not have a template). Returning true transitions to the CleanupRender phase.

Notice how Tapestry adapts to your methods, as marked with the annotations. It also adapts in terms of parameters; the two annotated methods here did not perform any output, so they did not need a MarkupWriter.

What's really mind blowing is that the template and body of a component will often contain ... more components! That means that many different components will be in different phases of their own state machine.

The SetupRender phase (see @SetupRender) is where you can perform any one-time per-render setup for your component. This is a good place to read component parameters and use them to set temporary instance variables.

Components may or may not have a template. If a component has a template, and the template includes a <body> element, then the BeforeRenderBody phase will be triggered (giving the component the option of rendering its body or not).

If a component does not have a <body> element in its template, then the BeforeRenderBody phase is not triggered.

If a component does not have a template, but does have a body, the BeforeRenderBody phase is still triggered.

If no methods are annotated with BeginRender, then no special output occurs during this phase, but the template (if present) or body (if no template is present, but the component has a body) will be rendered.

If no methods are annotated with BeforeRenderBody, then the body will be rendered by default. Again, this occurs when the <body> element of the component's template is reached, or automatically if the component has no template (but the component does have a body).

The AfterRenderBody phase (see @AfterRenderBody) is executed after the body is rendered; this only occurs for components with a body.

If no methods are annotated with AfterRender, then no special output occurs, and the CleanupRender phase is triggered.

The CleanupRender phase (see @CleanupRender) is the counterpart to SetupRender, allowing final cleanup to occur.

Using Method Names instead of Annotations

If you prefer to avoid using annotations on your methods, you may do so by providing specific names for your methods. The required method name is the annotation name, with the first character decapitalized: setupRender(), beginRender(), etc. As with annotated render phase methods, Tapestry is flexible about visibility, return type and parameters.

Using this mechanism, the earlier example can be rewritten as:

This style is a trade off: on the gain side, the code is even simpler and shorter, and the method names will, by design, be more consistent from one class to the next. The down side is that the names are very generic, and may in some cases, be less descriptive than using annotated methods (initializeValue() and next() are, to some eyes, more descriptive).

Instead of returning true or false, a render phase method may return a component. The component may have been injected via the @Component annotation, or may have been passed to the owning component as a parameter.

In any case, returning a component will queue that component to be rendered before the active component continues rendering.

The component to render may even be from a completely different page of the application.

Recursive rendering of components is not allowed.

This technique allows the rendering of Tapestry pages to be highly dynamic.

Returning a component instance does not short circuit method invocation (as described below), the way returning a boolean would. It is possible that multiple methods may return components (this is not advised – insanity may ensue).

The following component returns a Renderable in the BeginRender phase and skips the BeforeRenderTemplate phase:

If a method returns a true or false value, this will short circuit processing. Other methods within the phase that would ordinarily be invoked will not be invoked.

Most render phase methods should return void, to avoid unintentionally short circuiting other methods for the same phase.

It is possible to have multiple methods that are annotated with the same render phase annotation. This may include methods in the same class, or a mix of method defined in a class and inherited from other classes.

Exception: Mixins whose class is annotated with @MixinAfter are ordered after the component, not before.

The order in which the mixins of a given class (@MixinAfter or mixins before) execute is determined by the ordering constraints specified for the mixins. If no constraints are provided, the order is undefined. See Component Mixins for more details.

In order to ensure that operations occur in the correct, and natural order, the render phase methods for these two stages are invoked in reverse order:

Within a Single Class

Currently, rendering methods having the same annotation within a single class are executed in alphabetical order by method name. Methods with the same name are ordered by number of parameters. Even so, annotating multiple methods with the same rendering phase is not a great idea. Instead, just define one method, and have it call the other methods in the order you desire.

Starting with version 5.3, Tapestry can optionally emit rendering comments for all requests; these are comments such as <!--BEGIN Index:loop (context:Index.tml, line 15)--> that can assist you in debugging markup output on the client-side. This will significantly increase the size of the rendered markup, but can be very helpful with complex layouts to determine which component was responsible for which portion of the rendered page.

Rendering comments are only available when not running in production mode.

To turn on rendering comments for all requests, set the tapestry.component-render-tracing-enabled configuration symbol to "true".

To turn on rendering comments only for a particular request, add the query parameter t:component-trace=true to the URL: